For those familiar with manga or anime, you may already know what “Kabe-Don” is. But for those who don’t, it is the best possible romantic situation that could happen. It happens when someone leans over someone else –who is against a wall– with one arm (or rarely both arms)… then DON! (The sound of something hitting a hard surface) This is what causes excitement and exhilaration.

Originating in Japan, the bizarre phenomenon of kabedon – Kabe  (壁) means wall and don (ドン) is the thud of someone hitting it – is the latest pop culture sensation to sweep the region.

The maneuver first became popular last year through a Shojo manga (cartoons marketed to a teen girl audience) called L‘, where the male lead corners his love interest against a wall using his arms. Both frightened and aroused, her large, starry anime eyes light up and her cheeks turn a hot shade of pink.

It didn’t take long before kabedon turned into the top anime buzzword in Japan, spreading like wildfire in mainstream media and even retail. If you’ve been anywhere in East Asia recently, chances are you saw one form or another of kabedon in ads, TV, movies or magazines. Japanese instant noodle company Nissin featured the pose in its TV ad while Domino’s Pizza in Japan distributed ‘kabedon coupons’, which gave discounts to customers who performed kabedon on the delivery person. There was even a pop-up kabedon café in Tokyo last year, where women would go to get ‘kabedoned’ by a specially-made doll that’s supposed to be half Japanese and half French.

So what exactly prompted all this raffish wall pounding? To people outside the region, kabedon might seem random and straight up weird. But looking at the context of the ‘fashionable male’ trends that preceded kabedon, it kind of makes sense. There was the ‘herbivore man’ (otherwise, rather unfortunately, known as ‘grasshoppers’), who was

cultured and stylish, but lacking in brute sexiness and romantic impulse. Astonishingly, in a few large-scale surveys, up to 60% of Japanese men in their twenties and thirties considered themselves ‘herbivores’. In Korea, self-proclaimed grasshopper characters soon became a mainstay of TV dramas and films.

‘After the “grasshoppers” phenomenon, there has been a trend among Asian women to want more aggressive, manly men giving them “tough love”,’ says Sujin Chun, a reporter for Korean newspaper JoongAng Ilbo, who recently wrote a column about kabedon.

This image of the passive, pliable Asian man lacking in virility, is easy to find in Western pop culture, too. We’ve all heard the, ‘Asian man = small penis’ jokes. And don’t even get us started on East Asian men portrayed in Western TV and film. Back in the ’80s, in classic teen flick Sixteen Candles, the character Long Duk Dong was being snubbed by Molly Ringwald after his comically inept inquiry, ‘What’s happening, hot stuff?’ (Accompanied by a gong sound, naturally.) Today, Long Duk Dong’s spirit is alive and well in the character of Han from 2 Broke Girls, whose dorkish, loser charm makes him a relentless butt of jokes for the two sassy leads.

Whether it’s the socially-inept nerd or the repressed sexual inadequate, the stereotype of East Asian men has frequently been equally unflattering in Asia and the West. Given all that, it seems almost inevitable that a trend like kabedon would appear soon or later.

Originating in shojo manga, kabedon wasn’t really created to fulfil male fantasies, but to address female ones. In a region where female discussions of sex still prompt puritanical tuts and huffs of embarrassment, the popularity of kabedon may even be a release for young women.

‘I think it’s pretty silly and harmless, especially compared to a lot of the more sinister attitude that get perpetuated in Asian pop culture,’ says Ben Applegate, an editor at Penguin Random House working on manga. ‘There’s obviously an element of physical domination. But the context it appears in is always one of female fantasy, especially in shojo manga.’

To young Japanese girls, this is an instant heart racer, knee buckling event in which the innocent girl feels euphoric as her dream boy leans in with undivided attention preparing for a kiss. 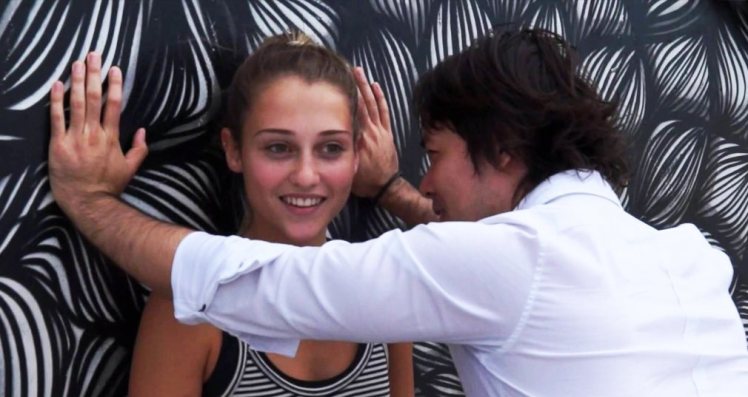 However, to most non-Japanese people, it seems like a pretty good way to get pepper-sprayed and kicked in the groin. While I generally deplore stereotypes, after asking all in the office, just a mere utterance of the words Kabe-don and each female (no matter the age) dreamingly gazed upwards with a soft, gentle smile. I personally on the other hand, who am not Japanese can only see “パワハラ” and “セクハラ”!! (Power harassment and sexual harassment) And despite my attempts at trying to convey how plain and utterly wrong it is in my mind, still all of my coworkers were smiling misty eyed no doubt envisaging their ideal Prince Charming.

It is so popular in  the Japanese culture, that there are fashion stores offering customers the chance to get kabe-donned by an “attractive” guy in an effort to increase sales. Not to mention the kabe-don cafes where you can order sweets with a bit of kabe-don on the side. …

LLV wants to welcome you to the hottest ever New Year’s Eve Event… NYE Miami 2017!!!

Are you looking for an EPIC experience for New Year’s Eve? Do you want to attend a once in a lifetime party, you’ll remember the rest of your life?

If you’ve partied with us before, you know how we do it! First class with a big dose of sexiness thrown in-and this year we’re doing it in Miami, one of THE best party cities on the planet. While it will be one huge city wide party, only 200 couples will experience it the way you will!

The sexiest party of the year will take place on board the $40-million-dollar mega yacht SEAFAIR in the Biscayne Bay facing Bayfront Park. This is where all the NYE festivities take place, including a huge concert (Pitbull performed the last 2 NYE’s), a spectacular fireworks display and the famous Miami Orange drop from the Intercontinental Hotel directly at midnight.

To read more and book today just press the button